HENRY has been working in Leeds since 2009 as a key strand of Leeds City Council’s city-wide Healthy Weight Strategy. This strategy has focused particularly on the early years with HENRY at the heart of it, providing practitioner training and family programmes in Leeds. In 2018 local children’s centres began delivering our Starting Solids workshop too.

The Leeds strategy appears to be paying off. A 2019 Oxford University study showed a significant and sustained year-on-year decrease in obesity rates at Reception.

Most excitingly of all, the reduction was primarily in children in the most deprived quintile where HENRY’s work is targeted; in these areas there was a relative reduction in obesity of nearly 9%. This runs counter to the national trend and the trend when comparing Leeds to its 15 nearest statistical neighbours (cities with a similar social and demographic profile).

As a result, 1 in 16 fewer 5-year olds in the city are now obese, meaning that 625 local children per year are protected from the emotional and physical consequences of obesity.

The graph below shows the decline in obesity rates across the city, as well as in the most deprived areas where the decline was steepest.

Following the success of this work in the early years, Leeds City Council commissioned HENRY to develop a healthy weight programme for primary school aged children and their families which is now being delivered in the city.

HENRY is underpinned by the best available evidence and rigorous evaluation 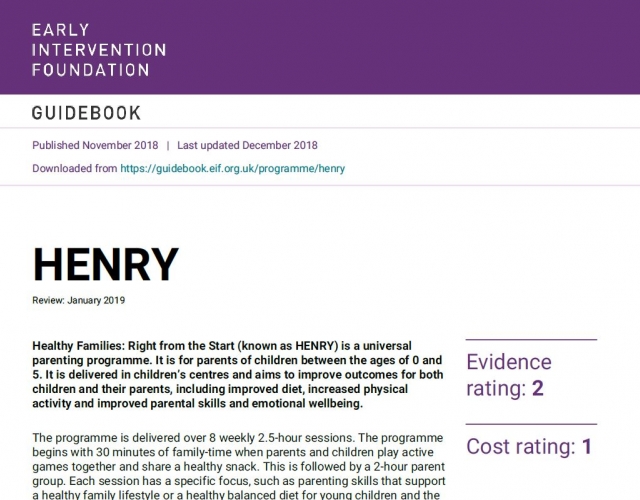